You are here: Home / The Sacred Sink / Mini-Van Madness! 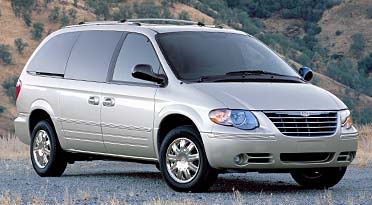 What a funny topic! For the past week or so we’ve been seriously considering trading in our new wagon for a van. At the same time, I’ve always been an SUV kind of girl so I just didn’t know if I could go for the mini-van. It’s been so fun to take calls from other mom’s (and dads) who refuse to ever drive one! I never would’ve imagined there were so many people dead-set against a mini-van! Haha. Still, we probably received equal feedback from parents who LOVE their mini-van and swear by it. Jim and I have been looking, comparing, and researching the market and I think so far I like the Chrysler Town and Country the best. Our recent Kiplinger’s mag. says the Honda Odyssey is the “Best in Class”. They voted the Kia Sedona “Best New Minivan”, and the Toyota Sienna “First for Safety”. I am lovin’ the stow-and-go seating of the Town and Country though so that’s my fave but, we’ll just keep searchin’!:) I have a remote at Junction Auto this weekend, maybe I can test drive a few while I’m there.:) On a different note, I’ve gotten LOADS of e-mails from people asking me where to get the advanced sale ads for Black Friday (for the day-after Thanksgiving shopping sales). This is the website: www.blackfriday.gottadeal.com. I have a ton of stuff written down that I want to get from Best Buy! They also have Target, Sears, Wal-Mart, Toys R Us and pretty much all the major retailers with EARLY editions of the sale ads! Okay the boys and I are needing a nap. It’s such a good day to take a quick pit stop and cuddle up in a cozy bed!!