You are here: Home / The Sacred Sink / Love the Lockers 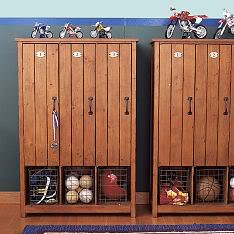 That darn Pottery Barn, I’m hooked now! These lockers are just too cool and such a smart idea for the boys. I actually saw them over a year ago during a trip to the Mall of America in Minneapolis. I thought they were so neat and I kept my eye on them ever since.:) Wouldn’t you know it, they happen to be on sale and we need extra storage space for the kids coats, etc! So now the PBK Tri-Locker is making it’s way to our new house. No more buying from here on out, that is a promise!
On another note, it felt great to be back at work and together with the team again. We had a fun morning and today I was able to come home and have both boys take a nap and for once, we all slept! That is what I was hoping for, now it’s just a matter of keeping a consistent routine. Baby #3 has been kicking like crazy and I’m already getting to the point where I am anxious to meet him and hold his little body. I have 4 months to go!! Now that we are settled in the house (pretty much) I am looking forward to starting “The Firm” again. I always say it’s the best workout I’ve ever done and right now I need something major to whip me into shape so it’s not such a tough road after the baby gets here. I also set a goal to run a marathon in 2007 and I’m serious about it (so far) haha. Really though, if Oprah can do it, I can do it too (okay, granted she had a personal trainer, cook, and support system)Lol. Anyway, I’ve been thinking about it for months and gauging if I could REALLY pull it off but now that the New Year is here, I decided to make the promise and set the goal. Even though it won’t happen until next year, I’ll have to start training mid-summer whenever I get the doctor’s okay, Well that’s it for today. Hope you had a safe, blessed happy New Year!