You are here: Home / The Sacred Sink / Zoo Day & Dilemma 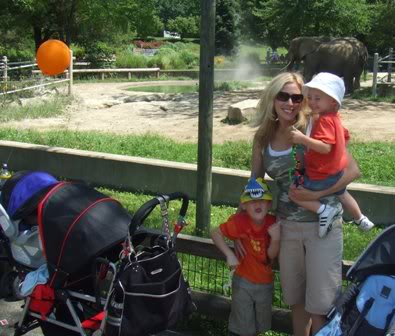 Here is a pic from our fun weekend at the zoo! We went to Cleveland Metroparks Zoo had a great family day. Have I mentioned how fabulous it is to have Jim off every weekend?! It’s the best! Also, we finally got the new “Joovy” tandem stroller and love it, it’s really worth every penny! I blogged about it earlier in the year and have had my eye on it for a while. It’s about the size of a regular single stroller (just a tad longer), an it has a little mini-seat for a toddler to ride along, or stand in the back. Love it!
So, I have a dilemma. A lot has happened since my last entry but I just haven’t written about it because I’ve been so busy. Several months ago I decided that I was ready to, someday, finish a marathon (I wrote in my blog last year). So it’s a bona fide item on my “to-do before-I-die” list you could say. Well, my good friend JJ lives in Hawaii and last week asked me if I wanted to do the Honolulu Marathon with her! I thought “yeah, in a DREAM world” because for one, we just don’t have that kind of money to fly and stay in Hawaii! I mentioned it to Jim (in passing) but it turns out he has sky miles he forgot about and JUST ENOUGH for a free round-trip ticket to Hawaii! Plus I could stay with JJ for free also! So I figured it was meant to be and my opportunity to seize the moment and go for it.
Well, reality has set in and now I am really not sure. I don’t doubt I could do it, I just have major guilt issues about training for such a feat while my kids are so little. It would mean a 4-5 day a week workout, sometimes 4 hours at a time (although that would be a rare occasion). I just feel like that is incredibly selfish to spend so much time on myself when my boys (including Jim) need me at home. I have the rest of my life to run a marathon, but my kids will only be at this stage such a short time, why miss out at all? Jim says I should just do it. He says it would inspire the boys and set a good example about achieving goals in life. He’s been so supportive. Plus my mom was going to come to Hawaii and it would be a once-in-a-lifetime chance for us to have a mother/daughter trip like this. Still, I just can’t get past the guilt aspect and I don’t know what to do. Thank goodness it’s in December and I have a little while to figure this out. Hmmm. Anyway, my time is up, gotta run!