You are here: Home / The Sacred Sink / Renewing our Vows 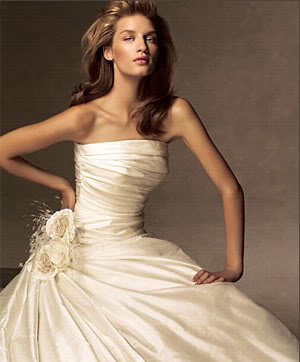 Open the floodgate! Talk about something that caught me off guard, looks like there is a lot of interest in weddings, dresses, and renewing vows! I love it too though, and if you missed it, here’s the lowdown. Jim is going through the RCIA program (it’s the process of becoming a Roman Catholic) and part of the requirement is to renew our vows in the Catholic church. When I heard that I was very excited and we’ve been talking about for a few months privately. Here’s the thing, when Jim and I got engaged we did the typical wedding planning/dreaming and initially thought we would have the traditional ceremony etc. We ended up quickly throwing it together though because he was going on leave (from the Army) and we decided to have it in the front yard of his parents property in Georgia. In fact, his mom and sister did most of the work, we bought a cake at the local Wal-Mart, the Southern Baptist preacher conducted the ceremony, and I bought my dress at a department store for about $60. I would not change any of it, it was a blessed day in many ways, but a small part of me always wished I had been able to wear a real wedding dress. Some people might think that sounds stupid, but as a little girl I had the typical wedding day fantasy with me wearing white and walking down an isle. I’ve never regretted the way we got married but after hearing we would be renewing our vows, I have to admit I thought about how cool it would be to have the traditional bridal gown and mini-ceremony!
Jim said that’s fine with him, and guys can rent tuxes for cheap these days too, so that’s where we left off. In a way, I just think it would be so romantic for our children to see us renew our vows. I never really had a desire to do that before, but since it was dropped in our laps, I’ve fallen in love with the idea! It’s just so easy to get in to a routine of busy schedules, laundry, and every day monotony (which is fine) but to me, this really gives us a chance to cherish what we’ve built as a family and appreciate and celebrate our commitment after 6 years. So that’s all I know at this point! After just casually mentioning it to the guys this morning I received so many wonderful e-mails! People volunteering to take photos, make a cake, donate a dress, etc…how wonderful! To be honest, I haven’t even thought that far ahead all I know is it would be neat to have a dress! Lol.:) Although we are also timing it for December when my in-laws are visiting, and the church will be decorated for Christmas anyway so that would be a nice added touch. I’m not really sure where to go after that. Do we go somewhere for a reception? We don’t want to spend much money on this, so I’m not even sure how/where to go with this. Well I better run but that’s the latest. I’ll keep you posted!