You are here: Home / The Sacred Sink / Keeping up with the Jones’ 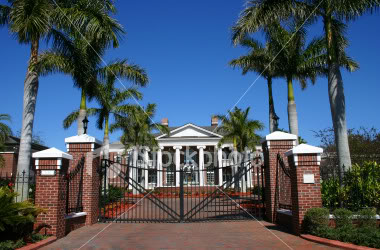 Who are the Jones’ and why do we care about how much they have vs. what we have? It’s such an odd thing. This year one of my resolutions is to stop comparing myself to other people. For some reason I feel like whatever we have, it’s still not quite enough. I don’t know how I came to feel that way but I recognize it’s idiotic! Will there EVER be enough money or big enough house, etc? I know in our society we are judged that way a lot, and often emphasis is placed on status. But who sets the standard? Bill Gates? Celebrities? The rich family living in the gated community? It’s really silly when you think about it. Maybe I’m the only one who actually feels that pressure but I realize I need to let it go. I remember one time I was in charge of dropping off/picking up someone from AA meetings every week. I’ll never forget sitting in the parking lot and being surprised by all of the cars parked at the church. Cadillac, Land Rover, BMW, almost all of them really nice, expensive cars. So judging by the car on the street I would think those people really had it all. Turns out they were living with the nightmare of addiction and it wasn’t the perfect “American Dream” after all. That moment put it into perspective and I try to remind myself that it’s futile to compare or feel inferior because it’s NOT “things” that matter at all! Don’t get me wrong, I am acutely aware of the infinite blessings in my life, it’s just I always feel pressure to have more, do more, “be” more I guess. Part of that is healthy because it keeps me motivated but I know there is a point I need to just relax and feel content and…at peace.

Okay, enough rambling.:) So I have a big list of resolutions for 2007 which is funny because I didn’t intend to really do that this year. It just kind of happened, I feel compelled to start fresh! We are trying to get our finances in order, that’s the biggie (and why my mindset is on money right now). I also want to complete the Cleveland Half-marathon in May, continue to get more organized, and save enough to go to Disney before 2008. We originally planned to go this summer but we scratched that idea. Hanging out in Florida during July heat (with a baby to boot) just doesn’t seem like the best idea! We still want to go, just later. I think that’s it. I better get going though, I need to clean while the boys are sleeping, yet another one of my resolutions!!:)