You are here: Home / The Sacred Sink / New Basement ! 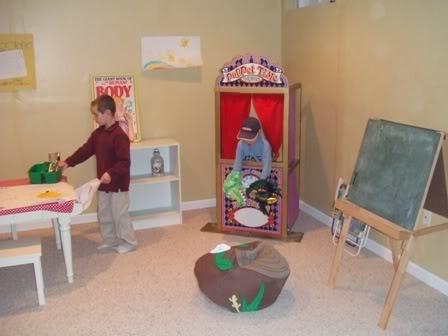 Well, here it is! Jim’s year-long hard work on the basement is just about complete. We haven’t decorated yet (as you can tell) but who cares right…it’s the basement after all.:) I still want to get some picture frames up, we have an art wall planned, etc. The other side is our movie/workout area. I actually like that we only have a few things down there right now because it allows the boys to…be boys! They wrestle and play football and we don’t have to worry about much more than one of them getting rug burn. Thanks again to Jim! My handsome handy-man.:)

Earlier this week he sent me a news story from Fort Bragg that I thought was so funny. We used to live there when he was in the 82nd and Gabriel was actually born at the hospital referenced in the article. It’s about how many of the soldiers came home at the same time and now 9 months later it’s a baby boom the likes of which the city has never seen! Ha ha. We’ve all heard those stories before but not to the extent that it’s happening in Fayetteville. Cute. Click here to read about the surge in babies.