You are here: Home / The Sacred Sink / My Singing (er…shouting) Sons :)

One of my favorite things is to hear my boys sing “You are so Beautiful to Me” , a song they adopted after watching the Little Rascals movie. Garrett (my 2 year old) is especially sweet when he belts it out and really puts his whole body into it. Priceless.:) I decided to record them but they were wound up and shouted the song more than actually singing it. They are still cute to me but then, I am a little biased!:)

While I have my “moms brag book” out, I have to show you this picture! Yesterday we were playing in the basement and Garrett got the Lincoln Logs out. I intended to help him build but he’s at a stage where he’s very independent (and strong-willed) so he wanted NO assistance from ol’ mom. I played the Wii with Gabriel and Grant and turned around to see he built an entire cabin! Way to go Garebear! Not too shabby for a 2 year old, he clearly gets his patience and building skills from his father.:) 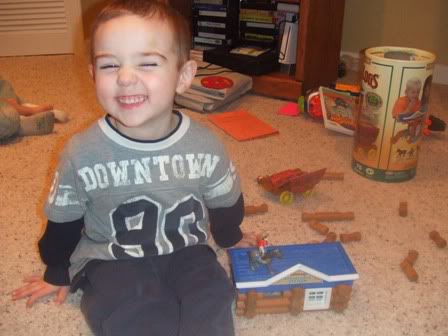