You are here: Home / The Sacred Sink / Articles / Fresh Starts

These last few weeks have brought some new beginnings.  The boys are officially back in school!  I was not home in the morning for Gabe and Grant’s first day, but I did take the day off for Garrett.  That way, I knew I would be sending all three of them off together (Garrett didn’t start until Monday).  Anyway, our tradition is to go out for breakfast, but this year I decided to make a big spread at home.   I had visions of the boys waking up to the irresistible smell and following their noses downstairs before their alarm went off.  Nope, not a chance.  Ha ha.  We had a rough start and the boys didn’t want to wake up, then there was an altercation over toothpase.  It also took me longer than I anticipated to make breakfast, so we were running late, and I didn’t get a photo.     I was guilt-ridden.   I did snap this one after class yesterday:

Here’s our big guy, backpack and a smile!:)   My friend Jen also took one, and  Jim took a few photos  with his cell phone of Gabe and Grant, so at least we do have some documentation. 🙂
I also have another missing tooth to report!  Grant will have a hard time eating corn on the cob for a while!:) 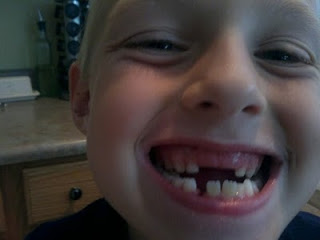 The other fresh start deals with our recent food changes.   I am excited to report that by cutting out chocolate (for the most part) and making better choices, I have lost 7 pounds!  Not the 10 I set out to lose, but I’m proud of what I’ve learned along the way, and have developed some better, hopefully permanent eating habits.    I was in a rut for a long time of same-old, same-old because it was easy, but not necessarily all healthy.  The beauty of the Internet is all of the recipe websites and fun ideas to try!    It’s really been a fun adventure.  Last night for supper we had homemade breadsticks (easy w/wheat dough from Trader Joe’s) and this 17 Bean/Barley mix soup: 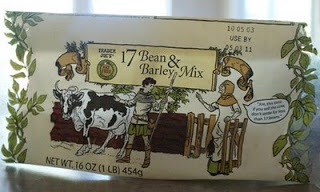 Today I had this for lunch: 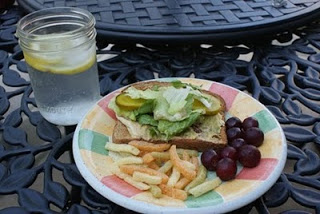 It’s high fiber wheat bread (toasted) with 3-layer hummus, avocado, tomato, pickle and lettuce.  The combination of flavors was great!
I also found this scrumptious recipe for cauliflower mac n cheese.  Real Simple has some great dinner ideas!
That’s about it.  We are hoping for some developments on the adoption front.  Will post when we have an update!:)