You are here: Home / The Sacred Sink / Articles / Delivery! 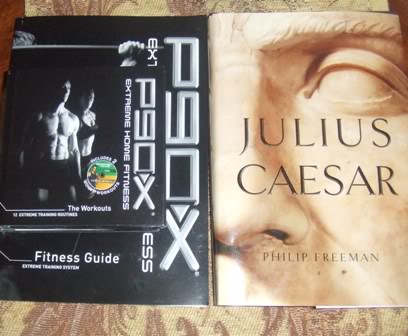 Last week the FedEx guy dropped off two goodies we’ve been waiting for. First, after much deliberation and about a year of throwing the idea around, Jim ordered the “P90x” workout system. He has a friend who was impressed with the results and that sold him. It is an intense workout though, no doubt about it. I always thought it looked good, it’s just it seemed very high-maintenance and I figured it would be take more time than I had in order to stick with it. A few months ago though, I heard Greg Willits (from the Catholics Next Door radio show) rave about the program…and they have several kids and a busy life too, so that further peaked my interest.
Well, it’s been 6 days and so far Jim and I have managed to squeeze in the workouts. In fact, he is even following the meal plan for extra measure. I am proud of him. We’ll see how it goes but right now we are feeling the burn!

I also received my “Julius Caesar” book and thankfully that has been a good/interesting read so far. Yet another book to add to the stack on the nightstand!:)